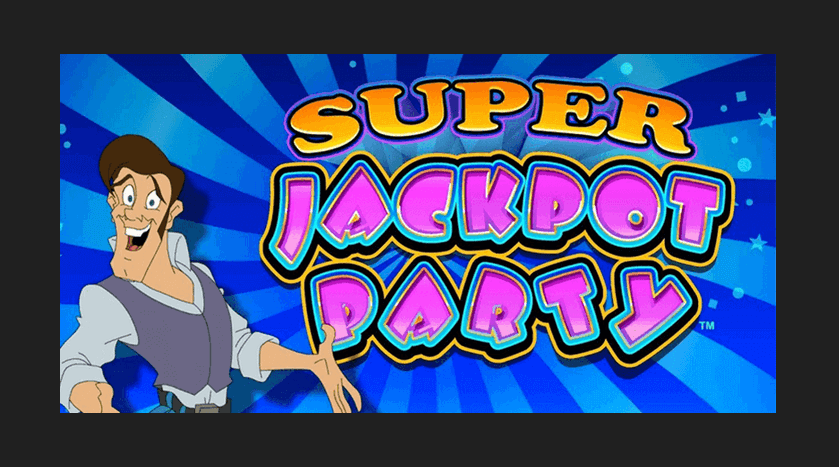 This game features colourful and bright party symbols. The party symbols featured are a wrapped gift, balloons, a glass of punch and paper party cups as well as the lucky number 7 symbols in different colours.  Payouts for the Super Jackpot Party slot symbols can be viewed by clicking the paytable button.

The wild symbol is the disco ball and will appear on reels 2, 3, 4 and 5.  It will substitute for all of the symbols except the 2 feature symbols.

There are 2 feature symbols and they will appear on reels 1, 3 and 5.  During the party feature players are shown a grid of presents to choose from and each one has cash, prizes or special features.  Some of the gifts may contain party poopers.

The party pooper is a policeman, a boss or an alien that does not like parties.  If any of these party poopers are revealed the feature will come to an end.

The party animal feature offers more multipliers, a dance feature or the whack-a-pooper feature.  During the whack- a -pooper round players can hit a party pooper using a rubber hammer each revealing random prizes.  These prizes could be in the form of multipliers or a free pick giving players another round.

Players are invited to attend a dance party in the dance feature and can win cash prizes that are determined by a dance meter that will increase while the party animal dances.  Players could win a multiplier of between 8 and 75 times.

Players on the web may receive a party saver, which protects them from any of the party poopers, and players will return to the party feature and continue where they left off before the party pooper was revealed.

Super Jackpot Party may seem like a simple online slot at the outset, but it offers a range of different features which keeps the game interesting and fun to play and does not follow the pattern of a normal slot game with free spins.  This slot has the potential for good wins during the various features.