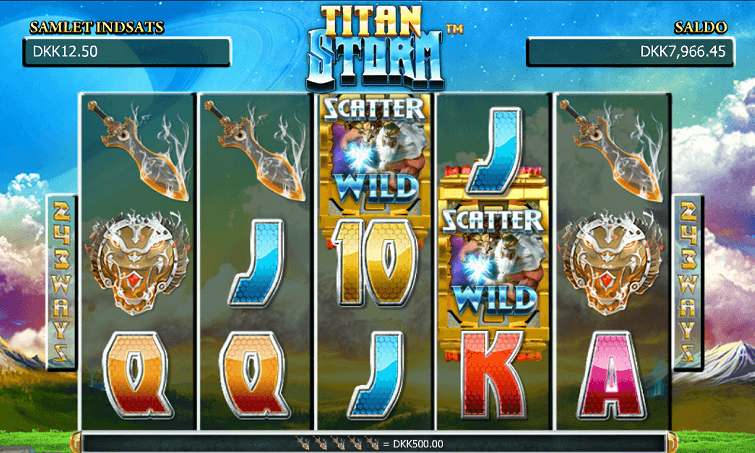 The Titan Storm slot machine game, created by NextGen, is an entertaining online gambling experience. It features well drawn tiles, as well as a powerful interactive soundtrack, providing a thrilling experience with every matching sequence paid out. The visual design, featuring mythical creatures and Titans, is not as vivid as some other slot machine games, but sure to entrance players that are fans of the mythical and keep them coming back for more.

How to Play in Detail

The Titan Storm slot machine game is based around the standard rules. The game uses a five reel, two hundred and forty three pay line system and if you want to check out some other slots having five reels, visit here. As would be expected, the player is required to make an initial upfront bet. The size of the bet can be chosen via the interface at the bottom of the screen, using the up and down arrows. Once the bet is decided, the reels can then be spun via the play button. To find the play button, look to the bottom right of the screen. Upon the reels stopping the visible tiles will automatically form matching sequences, with payouts occurring according to the value of the tiles in the sequence. Of course, if any bonus tiles are in the sequence they will automatically trigger and the bonus features will occur. If you would like further explanation on how to play the game, you may contact the customer support centre of the website on which you play. Further information about the matching sequences may be found via the info button at the bottom left of the screen.

The picture tiles in the game are the most valuable, with the beautiful female titan being the best possible match to create. Matching her five times is the biggest possible standard win. Other tiles include a sword, shield, and gryphon. Note that the nine, ten, jack, queen, king and ace are also present, but are the least valuable tiles in the game. Keep in mind that every tile needs to be matched at least three times to grant a payout, and may not be matched more then a maximum of five times.

The most outstanding thing about the Titan Storm game is the bonus tiles and special feature system. The wild card, represented by a muscular and intimidating Zeus, can match with any other tile, allowing for matches to be made where none were previously possible. You may, for example, match two aces with a wild, in order to create a three ace match. The scatter symbol, a golden door, will trigger a special bonus game if matched with itself three times. The unique thing about Titan Storm is that the scatter tile may match with the wild tile, meaning that bonus games are far more frequent then in other, similar games. During a bonus game the casino player is granted ten free spins, during which any five of kind matches pay out five times more then normal. Note that during the free spins, more free spins may be added to the free spins remaining if scatter symbols are again matched.